I just read an excellent post here by Andrew Old which clarifies a frequent misconception in debates about education.

Put simply, there are two key debates in education – one is about the content of the curriculum, and one is about entitlement. But generally, these two ideas get conflated. Thus, if you believe in traditional academic content, people will automatically assume you are also in favour of a system that is academically selective at 11. Likewise, they will assume that if you are in favour of a comprehensive system of education at 11, you will be in favour of non-traditional content in the curriculum. It is easy to see why this conflation has come about: in the UK, in practice, most of the people who believe in academic content do tend to want the grammar system, and vice versa. However, there is no intrinsic theoretical reason why these two views should go together, and indeed in many countries the ideas do not go together at all. I would argue that is merely a historical contingency that these separate arguments should have become intertwined in the way they have. Indeed, even in this country, the conflation of these ideas results in some complete illogicalities. I recall a governor of a nearby school explaining fluently to me why he believed that the grammar system was unfair, undemocratic and demoralising. He then segued into an equally persuasive defence of why his school didn’t offer French, English Literature or History beyond year 9.

Andrew has come up with a nice quadrant to represent these different beliefs. 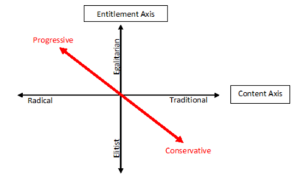 Andrew’s argument is, quite perceptively, that on the issues of both entitlement and content there were striking similarities between David Blunkett and the coalition front benches (although he also notes correctly that the Tory back benches are keen on a return to grammars.) I would largely agree with Andrew on this, with one caveat. Firstly, David Blunkett, whilst a traditionalist on behaviour, uniform and reading methods, was in fact not such a traditionalist in other aspects of the curriculum. Blunkett’s literacy and numeracy hour reforms had the entirely predictable side-effect of reducing the amount of time available for History, Geography and Science. That is not a traditional approach to content and nor is it a particularly effective one, as this video from Dan Willingham makes clear. Also, the very names of the ‘literacy’ and ‘numeracy’ hours show how much the Blunkett reforms emphasised the idea of transferable all-purpose skills, not the idea of traditional bodies of knowledge. To a large extent, the Blunkett reforms organised the primary curriculum around the idea that skills could be taught in isolation from knowledge.

I will discuss similarities and differences between the Blunkett reforms and the Gove reforms in my next post which will also involve a quadrant! Oh, the excitement! If one of the problems with blogging is people wilfully misrepresenting you on Twitter, then one of the joys of it is people actually reading your posts about quadrants on educational politics.