Why and how we should teach grammar

Take a look at this piece of work. 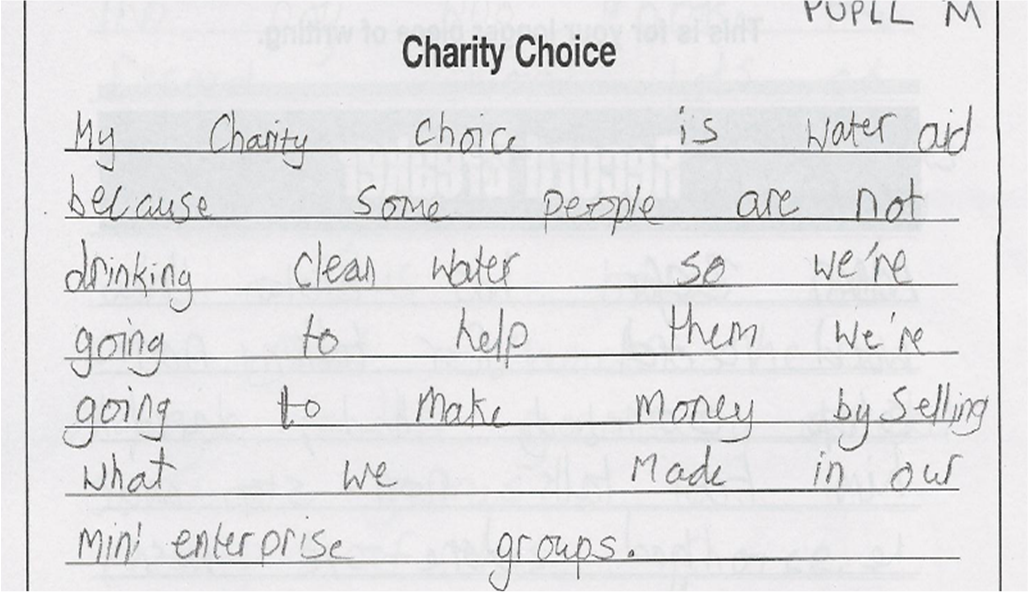 This is a level 3c piece of work, taken from an Ofsted report. You can see the rest of it on page 19 of this document. From my experience of teaching English in secondary schools, I find the mistakes that are made here only too typical. Essentially, the problem here is that the pupil has an extremely weak grasp of sentence structure. When I first began teaching, I used to mark work like this by saying ‘Add more full stops’ or ‘Use more punctuation’. This is of course useless advice. The problem isn’t that this pupil isn’t using enough punctuation. The problem is they don’t know where and how to use the punctuation.

So, if we accept that correct sentence structure is important, and we know that many of the pupils we educate start secondary school with writing like the above, how do we get them to write correct sentences? I have struggled with this issue myself, and here are my tentative conclusions.

We have to start with the basics. There is no point starting a lesson explaining to pupil M above the punctuation needed when using ‘however’ or ‘nevertheless’. They might start to use the correct punctuation for these words, but they will still not be constructing proper sentences. We need to get them to appreciate, first of all, what a sentence is. And to understand what a sentence is, you have to know what a verb is and what a subject is.  How do we get pupils to know what a verb and a subject are? These are not simple concepts. We could get pupils to memorise that a verb is a doing word, of course, and I do think it is helpful for pupils to know that. But that definition is slightly misleading. Look at these two sentences:

I went for a run.

I run to the shops.

Give those two sentences to most pupils who have learnt that a verb is a doing word and they will tell you that ‘run’ is a verb in both of them.

But actually, I wouldn’t introduce the first, more complicated sentence at this stage. I would begin with very simple and patterned sentences like ‘I walk to the shops’, ‘I eat lots of chocolate’ and get pupils to identify ALL of the parts of speech in them. I would start with the following five parts: verbs, nouns, adjectives, articles and prepositions, in that order.

If you begin by introducing these five parts of speech very simply, then, when you introduce a complicating sentence like I go for a run pupils might not instantly be able to tell you that go is the verb and run the noun, but they might at least pause and realise something odd is happening here. Then you spend time looking at words which can be nouns and verbs, creating sentences with those, and making that concept secure.

Then, hopefully, you’ve secured a fairly basic understanding of the verb. In doing this, you’ll have implicitly touched on the idea of a subject, and now you will need to make that implicit understanding explicit. Then, it’s on to plural and number – the different types of subject. It’s probably worthwhile spending some time conjugating verbs, and explaining the difference between regular and irregular verbs.

When you have done all that, you are probably ready to explain what a simple sentence is.

If you look at the sheer amount of stuff that is necessary just for a basic understanding of a simple sentence, you will see firstly that you need to spend quite a lot of class time on this, and secondly that pupils will need to memorise a lot of the rules and processes. They will need to memorise the rules and processes in order to free up space in working memory so that when they come to write their own simple sentences, the process is as automatic as possible. They also need to memorise the rules and processes because grammar goes on to get a lot more complicated than this, and they need the basic rules well established in long-term memory so that the more advanced rules can build on these without taking up too much space in working memory. Here’s a concrete example: pupils need to memorise what the independent clause is and be able to write examples of it automatically. Then, when I teach the semi-colon, I can say: ‘the semi-colon is used to link two independent clauses’ and that will make sense to pupils instantly. They won’t have to go back through their books and remind themselves what the independent clause is. They don’t have to go on Google and look up what an independent clause is. They know.

So how much class time would all of this take? Remember, because I am not saying that we should just memorise rules, you are going to need an awful lot more time.  I would say about ten-fifteen one hour lessons. And remember, this is just to get to an understanding of the simple sentence. More advanced sentence structures, clauses, conjunctions, the comma, the direct object, the active and passive, the apostrophe – all these will take hours more. Not only that, but as things get more complex you will need to build in a lot of time for review and revision. And weaker students with poorer working memory will need more time even than this. In total I think maybe 30-40 hours a year of explicit grammar instruction of the sort I have outlined above would be of immense value in getting all pupils to write complex and advanced texts.

But I know of no official government publication which suggests spending anything like the amount of time on grammar, or using anything like these methods. Here are three recent reports on English teaching by Ofsted – from October 2011, May 2011 and June 2009. Not one mentions teaching grammar in the way I have outlined above. Most of them don’t mention teaching grammar at all; when they do mention it, they make such laughable errors as claiming that alliteration and onomatopoeia are grammatical features. The methods that they suggest for improving the writing of pupils like Pupil M are ones that have never worked in my experience and which you wouldn’t expect to work given our understanding of how the brain works.

There are three main problems with the way they suggest teaching grammar in these documents (which is pretty much the same way I was taught to teach it). Firstly, there is simply not enough time or attention given to it. It is barely mentioned in comparison to things like persuasive techniques or speaking and listening. Secondly, it is never sequenced. It is suggested that you can pick out any aspect of grammar and teach it whenever. That is, you could drop in a lesson on adjectives when you were teaching a poem that used lots of vivid adjectives, or you could drop in a lesson on the semi-colon when you were writing a persuasive letter. This approach misunderstands how these grammatical features work. I don’t think you should be teaching adjectives until pupils are clear about what a noun is, and you shouldn’t be teaching the semi-colon until pupils are clear about what an independent clause is.

Thirdly, it is often taught as a starter, not as a lesson in its own right. I find this ineffective as the topics above are quite complicated. If you only have 10-15 minutes at the start to introduce them, you have barely introduced the topic before it’s time to move on. By the time you’ve reviewed what you’ve done before, there’s little time to explain the new topic. Also, if you do a starter on grammar and then move on to reading the class reader, you’ve got a split objective and can potentially overload students’ working memory. What was the purpose of the lesson – to remember what happened in the class reader? To write about how the character felt? To use evidence from the text? Or to understand what a verb is? I prefer to spend one lesson solely focussing on a small aspect of grammar and making it secure. Then, when doing lessons on the class reader or whatever, you can drop the grammatical term in briefly in a small activity or even just a reference. That way it works to refresh memory.

One note on this post: one of the problems with writing anything about grammar is that people love to try and find a grammatical mistake in what you’ve written and post a ‘gotcha’ comment. I had one of these on something I tweeted about my previous post. I wrote ‘If Ofsted don’t understand grammar, what hope have the kids got?’ And someone called James De Vile tweeted

I had actually thought for a while about whether to put ‘Ofsted don’t’ or ‘Ofsted doesn’t’. In British English there is some flexibility on this. For example, we say ‘England are a good cricket team’ but ‘England is a great country to live in’.[i] Likewise, it is civil service convention for ‘the government’ to take the plural verb. My rule of thumb is to ask myself – what pronoun would you use? In this case, I would clearly have said: ‘Ofsted: they don’t understand’, not ‘Ofsted: it doesn’t understand’. So I went for the former. Of course I realized as I did so that I’d get some smart alec trying to correct me. Lo and behold, James obliged. There are other ‘mistakes’ like this that people love to pick you up on. If you are thinking of correcting me for starting a sentence with a conjunction, ending one with a preposition or splitting an infinitive, please take the time to read about these issues first.

Whilst that tweet most certainly was not an error, of course I am not perfect and like everyone else I make mistakes. Of course I want people to let me know if I make mistakes so I can correct them. The above is a long post and I don’t have the money to have all my posts professionally proofread. I am confident from reading it a couple of times that it is a coherent piece of writing. I wouldn’t want to put money on it being completely perfect. If you spot a mistake, please do let me know in the comments at the bottom and I will correct it. Do not conclude that my making the mistake is in some way ‘ironic’, or that it somehow negates my entire point about the importance of correct grammar. If whenever you read a post about grammar your sole purpose in reading it is to try and spot an error and gloat, then you are really missing the point.