What makes a good flashcard?

What makes a good flashcard? Keep it really simple.

Here’s what not to do. 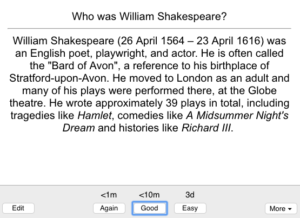 The problem with this flashcard is that it is not clear exactly what you are supposed to remember or how you can be sure if you have got right. Are you supposed to recite every word? Just identify some of the major facts? What if you get a couple of them wrong, but most of them right?
Rather than having one flashcard like this, you are better off with several much simpler ones, like these.

You can even do some reverse cards, like so:

When you look at each of these simpler flashcards in isolation, they look quite trivial. It is easy to mock this kind of atomisation, and plenty of people do so. But when you view a set of flashcards together as a collective whole, you can see that they are all working together to create the beginnings of a “Shakespeare schema”. Combined, they contain all the content of the more complex flashcard, but they are better than the more complex flashcard for the following reasons.

This principle, of keeping it simple, is one I’ve borrowed from Piotr Wozniak, creator of the SuperMemo spaced repetition algorithm (read more about him here). He has a list of ‘Twenty rules for formulating knowledge‘, and ‘Stick to the minimum information principle’ is rule 4.

This is also something I write about a lot in both Making Good Progress and Teachers vs Tech. Memorisation is really important, but you have to memorise the right things. And deciding what the right things are is often not straightforward. The process of breaking down a paragraph of text into a series of flashcards often throws up interesting questions that aren’t always clear in the paragraph itself, and helps you to reflect on how the meaning of the text.

Another criticism of this approach is that both types of flashcard are not that good. They are both dealing with low-level declarative information, not with any deeper analysis. Nor do they really engage with the reason why we bother with Shakespeare: ie his great works and language. This is true to a certain extent of this set of flashcards because I am trying to demonstrate a principle. In future blogs I’d like to write about how building up more and more flashcards like this does lead to deeper analysis, and how you can use different techniques to help you memorise poetry and key quotations, too.

I’d also say that even the above set of flashcards are really useful in establishing a foundation of knowledge that will set students up to learn more about Shakespeare. When I taught secondary English, I’d often teach pupils in Year 10 and Year 11 who had studied a Shakespeare play before and had some kind of an idea about who he was – but their knowledge was hazy and sketchy and also subject to interference from other topics: eg they’d ask if Shakespeare wrote Oliver Twist or knew Charles Dickens. A simple set of flashcards like these could have helped consolidate their early knowledge of Shakespeare, allowing later lessons to build from this foundation rather than having to reteach it.

With all that said, you can download a set of flashcards I’ve made about Shakespeare’s life and works. They are a simple introduction and designed for KS2 / 3. I’ve done the same flashcards in two formats, one for Anki and one for Quizlet. Feel free to download and edit them to suit you.