What will COVID-19 change in education? And what will stay the same?

A couple of weeks ago, I ran a webinar for the Teacher Development Trust where I asked everyone which statement they agreed with most.

However, I ran a Twitter poll on June 5th with almost exactly the opposite responses. 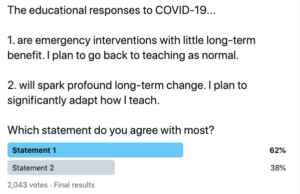 Emergency changes we will be happy to give up
In WWII, people got used to putting up black out curtains every evening, travelling with gas masks, and living apart from children who had been evacuated. None of these changes endured. They were necessary emergency changes that nobody wanted to continue in peace time.

My prediction is that the type of teacher assessment introduced as an emergency replacement for exams will fall into this category. It is necessary for now, but it has numerous flaws and is not something that will endure.

Emergency changes that endure
In both world wars, women did jobs that had previously been seen as the preserve of men only. They did the jobs well and society did not collapse as a result of them leaving the home. By and large, the emergency freedoms women won in the wars persisted into peacetime.* This was a necessary emergency change that endured: rather than things going “back to normal”, what we defined as normal changed. (It’s also interesting to note that the two European countries that were the last to give women the vote were Portugal and Switzerland, who were either neutral or less affected than other European countries by both world wars.)

My prediction is that greater use of virtual learning environments (VLEs) and homework platforms will sit in this category. I think they are proving just how useful they can be, and also that a lot of the resistance to them was probably the result of inertia or confusion, not anything more substantial.

Technological accelerations or diffusion
Crises often accelerate or diffuse technological advances. Aeroplanes probably developed more in the period 1914-1918 than in any other equivalent period. Plastic surgery techniques improve during wars. Nuclear energy was dramatically accelerated by both WWII and the Cold War.

It is obvious that Covid-19 is having a similar effect on medicine, but I am not sure the crisis has lasted long enough for it to dramatically accelerate education technology. What has happened, however, are technological diffusions, with programmes to ensure students have access to a connected laptop or tablet. I think a more modest but potentially still significant technological diffusion is that everyone knows how to log on to their VLE. In the TDT webinar, a senior leader told me that previously, about 20-30% of staff didn’t know how to log on to the school’s VLE, and now they all did. This might seem really trivial, but access to a VLE is probably the first step to a lot of more innovative uses of technology, in the same way that email may not be the most revolutionary internet technology, but having an email account opens up so much of the rest of the internet.

Changes in our experiences and world-view
Crises can often involve experiences that change the way we think about ourselves, other people, and the world. For example, in both world wars British people mixed with other classes in a way that they hadn’t before, and saw a side of life that they wouldn’t have. Today, many parents are spending more time engaging with the nuts and bolts of teaching and learning than they would have done before. The initial indications are that they are realising what a tough job teachers have. What will the longer term impacts be? Will parents sustain their interest to the extent that more of them take on home schooling, or will they be grateful for the chance to hand the burden over to teachers and for things to go back to normal? I am really not sure about this one: on this as so many other things, we will just have to wait and see.

*With some interesting exceptions eg women’s football expanded during WWI and then was effectively banned until 1971 by the FA.